As a huge engine that drives the next 10 years of information industry and social and economic development, 5G will increase the investment scale of the whole industry chain such as an antenna, RF, fiber optic cable, optical module, and system integration. We temporarily focus on the segmentation of fiber optic cable.

5G will be based on the C-RAN deployment mode. The main demand for fiber-optic cables exists in the pre-transmission network from RRU to BBU and BBU to the aggregation point. It is estimated that the average fiber required for each macro station is about 2KM, the optical fiber required for each small station is 0.5kM, and the large core number optical cable (144 core) is used. The existing base station optical fiber multiplexing rate of the macro station is 50%. The macro station fiber demand is 3.8 million * 2km * 144 * 50% = 547.2 million core kilometers, the small station fiber demand is 8 million * 0.5 km * 144 = 576 million core kilometers. The total of the two is 1.12 billion core kilometers, estimated by 65 yuan per core kilometer, then the investment of 5G for the fiber optic cable subdivision industry will be as high as 72.8 billion yuan.

When the current base station is used for the construction of the base station, the optical fiber to the base station is mainly used to extend the optical cable component. Between the RRU and the BBU, a 1-2 fiber is usually used as the communication path, and one transceiver parallel channel is provided to cooperate with the SFP optical module. However, with the increase in the transmission rate and capacity of the bearer network by 5G, the traditional 2-core jumper can no longer meet the demand. It can be foreseen that the trend of multi-core MPO or MTP jumper being used for outdoor mobile communication will come. The brighter it is.

This is because, on the one hand, the maximum communication capacity of a 12-core and 24-core MPO or MTP jumper is 6 times and 12 times that of a normal 2-core jumper, respectively, but the volume is hardly increased, and compared to ordinary indoors. For fiber-optic jumpers, MPO or MTP jumpers are wear-resistant, flame-retardant, and have high tensile strength, making them suitable for outdoor environments or complex construction environments. 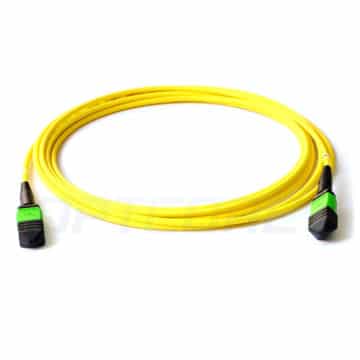 On the other hand, the use of high-density multi-core fiber optic connectors can increase the number of antennas in a single base station, thereby increasing the communication capacity of a single base station. Especially in crowded areas with high traffic and high traffic, the capacity of a single station is limited, and operators can use multi-core fiber connectors for optimization of base station design. Generally, a 12-core multi-core MPO or MTP connector can provide four transceiver parallel channels to cooperate with QSFP optical modules, which is equivalent to four times the base station expansion. The 24-core multi-core MPO or MTP connector can provide 10 transceiver parallel channels and CXP optical modules, which is equivalent to 10 times the base station expansion. Due to the above advantages, the application of MPO cable to the mobile base station bearer network construction will have the dual advantages of technology and investment cost, and it is likely to become the mainstream way for the carrier base station bearer network construction in the future. This also means that MPO fiber optic cable and its supporting components will become the hot demand for future 5G network construction.