Fiber attenuators are classified into the following four types according to different interfaces.

1. SC fiber attenuator: applied to SC fiber interface, similar to the RJ-45 interface, but the SC interface is flat, and the inside contact is a copper column;

3, FC fiber attenuator: applied to the FC fiber interface, the jacket is wrapped with a metal sleeve, and the fastening method is a turnbuckle. Generally used on the ODF side, mostly used for patch panels;

In addition to the interface type, the fiber attenuator can be subdivided into online, fixed and yin and yang, the specific differences are as follows:

The fixed fiber attenuator has a fixed attenuation value, and its shape is similar to that of an adapter. It is easy to install and use. It is mainly used by flange connection. Jumpers for FC, SC, ST and LC connectors can be used. They are mainly used in telecommunication networks, fiber test equipment, local area networks (LAN) and CATV systems. 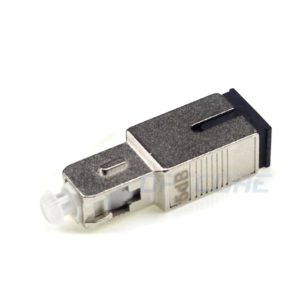